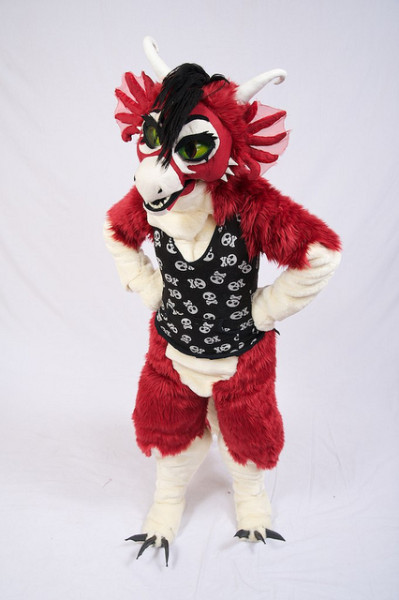 I never post here but I thought I'd stick this here a least. It's from the convention in November but I am currently doing some repairs on her to make her fit bettwe as well as improve her hands, feet, and wings. You can't see her tail here unfortunately but I was so busy that day I have no other pictures lD

Well, it's more of a rough sketch but it shows the main idea of my markings at least @_@ Haha, this was just a silly little project that took like five minutes xD Just something I scribbled up for two of my only real life furry friends. As far as I know, there's me, whose Kirabo is in the middle, Ashley whose character is Hiro on the left, and Adam whose character Agito is on the right :3 There are two other furries that apparently live here but they are Adam's friends and I haven't met them in person. One is a raver dog though and the other is a meerkat though :0

Hey, my name is Alex (short for Alexandria as I am a girl) and I made this livejournal mostly to get in touch with some of the furry communities on here as it has been some years since I've drawn furry characters, but I have recently taken on the challenge of making my first fursuit >:3 Whoo, I already have bruises on my hand from carving foam with scissors. Anyway, the character I am making is an African wild dog, also known as a painted wolf, named Kirabo. I'll post some artwork of him and probably some other things I doodle up later. Oh, my friend is also making her character named Hiro, a white wolf with blue markings, and I may add her progress photos of her suit with mine as we work on them. Sooo, that's about it!
Collapse